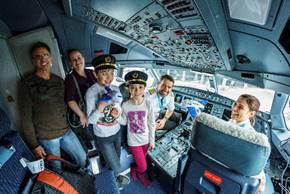 Montréal, April 9, 2019 – There were smiles all around during the 7th edition of the Premium Kids event held at Montréal-Trudeau airport. This unique day enables children with autism spectrum disorder (ASD) or functional limitations to familiarize themselves with the airport process and reduce their anxiety about flying.

This year, nearly 300 participants were able to experience the airport journey, from arriving at the parking lot to boarding a plane and listening to in-flight security instructions.

This initiative is inspired by a similar initiative, “Wings for Autism,” created in 2011 by the Charles River Center in collaboration with the Massachusetts Port Authority (Logan International Airport, Boston).

For more information on Aéroports de Montréal and its activities, visit our website at www.admtl.com.