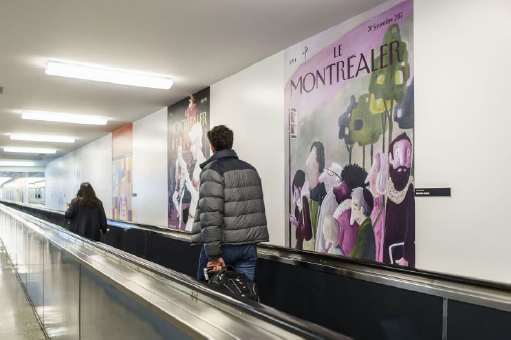 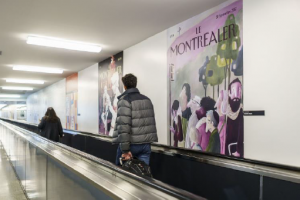 Montréal, February 7, 2019 – After being displayed in Montréal, Taipei and soon in France, the works of the exposition Le Montréaler are landing at Montréal-Trudeau Airport. Highlighting Montréal’s best-known features, the works of 52 illustrators and 10 authors will enhance the tunnel space leading to the terminal’s domestic zone.

Le Montréaler project brings together the talents of 62 Québec creators who have produced artistic and literary works in tribute to the famous covers of The New Yorker magazine. The artists took inspiration from the city’s iconic symbols to create eclectic interpretations forming a contemporary portrait.

Installed at Montréal-Trudeau to enhance the passenger journey experience, the exhibition occupies tunnel space located in the domestic zone leading to Gates 17 to 34. It is expected to remain in place for two years, enabling millions of people to recognize or discover the city through the eyes of Québec artists and creators who journey through time, space and everyday life.
“We are proud to be helping to bring the spirit of Montréal to life for our passengers through this impressive exposition,” says Karine La Salle, Director, Marketing and Communications, Aéroports de Montréal. “Thanks to the talents of local artists who contributed to the project, we are also paying a vibrant and touching homage to our city.”

Historical anecdote: Le Montréaler is a magazine that really existed, inspired by The New Yorker. It was published between the 1920s and the early 1970s in Montréal. Archives are available at the McGill University Library in Montréal.

About Aéroports de Montréal
Aéroports de Montréal is the airport authority for the Greater Montréal area responsible for the management, operation and development of Montréal-Trudeau International Airport and of the Mirabel aeronautic and industrial park. The corporation employs 625 people.